I’ve always loved fireflies. They seemed magical when I was a kid and would run around in the summer evening trying to catch them. I never kept them, always let them go. As an adult, they still have a magic about them, and luckily come out to dance in our backyard. Lately, they’ve been getting in the house at night. I’m not completely sure how, but it’s an old house, so cracks where bugs can get in are not uncommon. At night, while I’m trying to go to sleep, they hover around the room, glowing. It’s driving our cat to distraction, but I adore it.

When they first started coming in, I had this out-of-the-blue thought of: “Is it you? Are you my sign that things will be okay?” Silly, I know for a woman who scoffs at the ideas of destiny and fate to be hoping for a sign in the form of a firefly. But I’m constantly afraid of losing this new pregnancy like we lost Charlie, and as such I’m desperate for something to reassure me that we won’t. And fireflies are magical.

I went to the OBGYN this morning for my first appointment, and had about five crying jags. I was convinced I was miscarrying again. Thankfully, they did different checks than they usually would have at a six week appointment, and I was able to have an early ultrasound. I told the tech I didn’t want to see the screen, not until she had verified that things looked like they should. And then she very calmly told me that there was a heartbeat, and I started crying again because of the immense relief. (Of course, I also cried afterwards because Charlie had had a heartbeat, too, and still died, and they told me we couldn’t get another ultrasound until 12 weeks). But after she told me that there was a heartbeat, she showed me the screen. I saw the very tiny oblong shape of the new baby, and the flickering of the heartbeat. 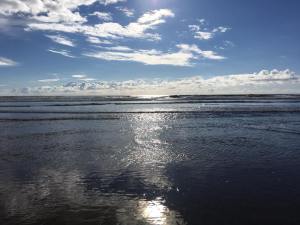